Victor Spirescu: Who Is Really Taking The Piss

“Couldn’t agree more Spiv. What have the NSPCC been up to now”?

Hi Voicey, fuck knows. Probably something that stinks, but I wasn’t talking about the paedophile fronted ‘charity’.

“Woops! My bad. Who are you on about then my bald headed, tattooed, Jahoo loving friend”?

I’m on about the Chimp and their propaganda bollocks in regard to this Romanian stooge Victor  Spirescu.

You see, Spaghetti, or whatever the stooges name is, was/is the fella who had supposedly taken advantage of the relaxing of the UK immigration laws and was splashed all over the front pages of the National Press after being greeted by the slimy, slippery toad MP, Keith Vaz-Aline, who – if you think back – was also inexplicably ever present at the side of the Saldanha family following the *aherm aherm* suicide of the Royal Nurse Jacintha, back in December 2012. 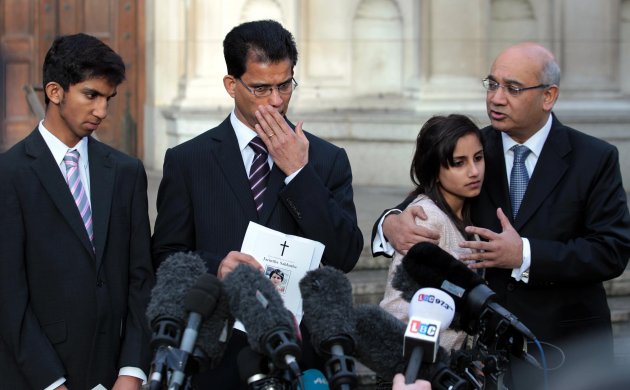 PHOTO: Slippy Vazaline with the Saldanha family. The Toad MP spent far too much time cuddling Jacintha’s 14 year old daughter, than is normal for even a family member to do – let alone a stranger… Just accusin’.

Now quite why sinister Vaz the Spaz would go to the airport to meet ‘n’ greet the Chimps anticipated massive influx of Romanian ‘free loaders’ is anyone’s guess.

But in any case, the mass exodus from Eastern to Western Europe never materialised –  just  like I had repeatedly stated that it wouldn’t.

In fact according to the Romanian Ambassador, Dr Ion Jinga, the total number of immigrants as of the 14th of January 2014 stood at twenty four.

Never the less,Vaz-Aline supposedly bought Spaghetti a cup of coffee on his arrival from Romania – at least he did according to the MSM –  but like most things you read about where our Sniffenpissin MP’s play a part, this simply wasn’t true. (See HERE and photo below)

So why all the MSM interest in the Spaghetti Western script – get it? … Go me.

I mean, just 3 days after getting here on New Years Day, Spaghetti was again the focus of a Chimp article:

Victor Spirescu, 30, insisted he was in Britain ‘to work’ and yesterday he was true to his word, arriving at an Aldi in Biggleswade, Bedfordshire, at 8am to clean cars until 6pm.

And then, on the 8th of January 2014 the Chimp ran the following headline:

Strange that the Chimpanzee’s at the Chimp knew that, don’t cha think?

I mean, what are his fellow ‘cut throat gypsies’, tell tale tits?

You see, today the Chimp has published the article below that carrys the headline:

He didn’t vanish very fucking well then did he you diabolic excuses for journalists.

In fact, if you type into the Chimps search bar: Victor Kajagoogoo – or whatever the fraud cunts name is – a total of  Twenty articles where he is mentioned pop up … Got that ?  TWENTY, 20 Chimp articles about the fella since he arrived here on the 1st of January!

And since it is now the 20th of January, that figure equates to an article a day, don’t cha know!

But why?  As in: why so many articles about a Romanian Immigrant?

Well, I would imagine that since our intrepid immigrant is portrayed as a hard working, benefit scrounging, drug addicted, wife beating mush, who is only here so as he can save up enough money for a Mercededs Benz, the Chimp’s message – and therefore the government’s message –  is something along the lines of:

“we told you, you lovely, honest, upstanding, extremely intelligent middle class people that the dangerous scroungers would come here in force to steal our benefits and our well paid jobs – of which there are plenty, plenty, and very well paid at that, not that the benefit scrounging, work shy British wasters are interested in them”.

Isn’t it a shame that the Monkey Cunts don’t show the same commitment to investigation when it comes to the subject of our wholly corrupt, perverted Sniffenpissin MP’s and scum cunt royal paedophile family?

Oh, and just one more thing before I go.

When talking about Vic the Dick and his bird, Catlaliar in regard to their hard life back in Romania, the Chimp had this to say:

For the time being Catalina is fending for herself by chopping enough wood to burn so she can stay warm in temperatures as low as minus 25c.

She then has to clean out a sty where a pig is being reared. It will be killed to eat next Christmas.

There is no running water in the crumbling one-bedroom house she bought with Mr Spirescu for £2,000 two years ago in the  village of Pelisor, which is 200 miles north of the capital Bucharest.

Miss Curcean has to repeatedly lower a bucket on a winch down a well on the mud lane outside her home for cooking, cleaning and drinking. There is an outside toilet which consists of a hole in the ground covered by a wooden hut… “poor cow. You can see why they are so keen to come over here can’t you Spiv mate”?

No, not really Voicey… Look at the car, the telegraph pole and the fucking SATELLITE DISH.

The MSM will be the death of me, I’m fucking telling you… Just sayin.

Three weeks ago Romanian migrant Victor Spirescu arrived in the UK with the promise that he wanted to work and then go home.

But after just one day washing cars with a friend in Biggleswade, he suddenly quit and disappeared.

Now it seems he has landed a new job earning £60-a-day working on a building site somewhere in east London, and is planning on moving his 19-year-old fiancee Catalina Curcean to the UK as well. Victor Spirescu, the first Romanian to arrive in the UK on New Years Day, has got a new job on a building site in east London Spirescu says Catalina is hoping to move from their pig and sheep farm in Transylvania and get a job as a cleaner.

He says her money will be spent paying for all their bills and food, while his money will be saved to buy a Mercedes when they move back to Romania in a year’s time.

Spirescu has refused to talk about the crime, though insists he is now a changed man

For the time being Catalina is fending for herself by chopping enough wood to burn so she can stay warm in temperatures as low as minus 25c.

She then has to clean out a sty where a pig is being reared. It will be killed to eat next Christmas.

There is no running water in the crumbling one-bedroom house she bought with Mr Spirescu for £2,000 two years ago in the  village of Pelisor, which is 200 miles north of the capital Bucharest.

Miss Curcean has to repeatedly lower a bucket on a winch down a well on the mud lane outside her home for cooking, cleaning and drinking. There is an outside toilet which consists of a hole in the ground covered by a wooden hut.

After quitting his first job Spirescu says he has just £5 left until payday, and is on the lookout for a better paying job such as working in the North Sea crab fishing, or on an oil platform.

Speaking to the Guardian, the 30-year-old says he quit his first job after media pressure surrounding his private life forced him out.

It was revealed shortly after he arrived in the UK that Siprescu had a past conviction for assault against his ex-girlfriend, which he has refused to talk about in detail, insisting that he is a changed man.

It was claimed last week the Spirescu beat ex-girlfriend Ana, 26, to the ground in a park before threatening to drown her in a lake.

After that Spirescu says he received more than 50 calls a day from journalists and had photographers pretending to need a car wash in order to take pictures of him.

People even stopped him in the street to ask for an autograph.

Little more is known about Spirescu’s past, except that he was born in Bucharest before moving to the small village of Pelisor. He says he left school at 18, learned English from the television, and then got on a plane to London.

Speaking about his time in England he says he expected the capital to be cleaner, and criticised British food for being ‘tasteless’ compared to the chicken which he kills and eats himself at home.

Speaking about his welcome party waiting at the airport for his arrival, he said: ‘There were television cameras, journalists and this guy Keith Vas – what was that about? I had no idea.’

Barry & The Drag Queen: A lovers tiff or much more to it than that? The Who’s who of Satanic Child Abuse