The Pervert of Oz

Our corrupt Establishment may just live to regret letting the Nonce Janner off the hook.

Indeed, there are a lot of angry voices shouting their disapproval all round from what I hear.

And it would seem that it is just the same in Australia.

You see, the fat fuck, nonce MP, Bernard Finnigan is finally going to go on trial 1455 days after he was first arrested on child pornagraphy charges.

Mind you, Finnigan did go to court in October 2013 where the following happened:

STATE MP Bernard Finnigan has appeared in court this morning in a bid to have the child pornography charges against him stayed.

The charges relate to alleged offending between December 2010 and April 2011.

Today, Finnigan’s lawyer Michael Abbott, QC, told the District Court prosecutors could not prove the steps Finnigan is alleged to have taken would have led to child pornography.

“We say that there is no evidence in this case that the steps taken, alleged to be have been taken by my client, is a step which would have yielded access to child pornography,” Mr Abbott said.

“They cannot prove that any particular pornography existed let alone that it contained (people) 16-years-old or under.”

Mr Abbott also said it was a matter of proving what one saw on the internet was correct in regards to the actual age of a person in an image online. “The problem with the internet is that every picture can be manipulated,” he said.

“White can be made black, brown, green.”

Prosecutor Ian Press said if the appearance of a person in an image could not be used to prove beyond reasonable doubt that they were under the age of 14, there would be serious limitations.

It was actually after that court case that I first heard about Finnigan following an Australian reader of mine sending me an article that he’d written about the useless fat-fuck.

Nevertheless, it would seem that the delaying tactic worked because the fat as fuck pervert didn’t go to court again until the 13th of April, 2015… And even then the hearing was only involved with legal argument.

And wouldn’t you just know it? His trial is now underway but on reduced charges:

STATE MP Bernard Finnigan’s child pornography trial has been “slimmed down” through negotiations before it has even begun, a court has heard.

Mark Norman, SC, prosecuting, said the majority of evidence in the trial had been agreed between the parties and would not be the subject of in-court testimony.

“We have, through a measure of agreement, been able to file some agreed facts (and) the trial will be slimmed down,” he said.

“There is likely to be only one witness.”

That witness is an SA Police electronic crime officer — Mr Norman said the court would have to be closed to the public during his testimony.

He said that was necessary because the court would have to view the child exploitation material allegedly accessed by Finnigan.

The viewing of such material in a closed court is standard operating procedure in cases of this nature because, by law, child exploitation material cannot be aired publicly.

The remainder of the evidence was this morning tendered in the form of a four-page document known as a statement of agreed facts. 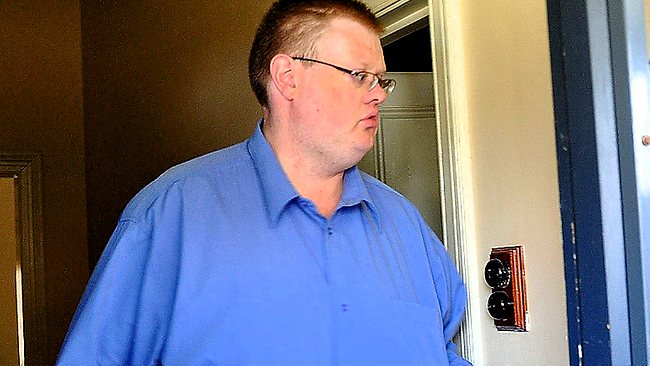 If found guilty, he faces a maximum five-year jail term for each offence.

Finnigan was arrested following a police raid on his home in April 2011, just two months after his appointment as leader of the government in the Legislative Council.

He resigned from the Labor Cabinet and, over the 1455 days that following, the scope of the case against him changed during pre-trial hearings.

Finnigan has been noticeably quiet in Question Time since his resignation, but continues to earn a $153,000 salary, plus superannuation, and have access to a $22,000 electoral allowance.

In his opening address, Mr Norman said the case revolved around material recovered from Finnigan’s Sony and Apple Mac computers following the raids.

He said analysis showed that, at 4.27pm on December 7, 2010, Finnigan entered a search term into the Sony computer’s web browser.

“The prosecution says that term was specific and unambiguously to do with child sex,” he said.

Mr Norman said that, at 4.13pm on December 24, 2010, Finnigan entered another such term and Google produced a list of websites.

He said the browser history showed each of those sites were accessed “over a period of about three minutes”.

“These sites advertise themselves as being legal … some contain a disclaimer suggesting the images are of models over the age of 18,” he said.

“The prosecution suggests it’s obvious that’s nonsense, that it’s obvious these girls are not over the age of 18, that many of the images are in fact of children. “We say that specific young girls are apparently under the age of 16, and some of these children are significantly younger than 16.”

Mr Norman said search terms were entered into the Sony twice on March 19, 2011, that had “obvious connotations of child sex”.

He said the Apple Mac was used in the same manner “on no fewer than four occasions” one month later.

“In fairness to the accused, he certainly did not spend hours (on these sites),” he said.

“It was probably about three minutes, yet he still had plenty of time to see and realise what was on the screen.

“The fact that he continued to look at these sites, rather than simply close them down as he might have done if this had been some terrible mistake, is particularly relevant.”

Mr Norman said Finnigan “must have remained at his computer” for those minutes, looking at what was on his screen.

“This might be called ‘furtive’ rather than ‘brazen’, but it is deliberate even if he only did so for one minute,” he said.

Michael Abbott, QC, for Finnigan, said his client insisted he was not guilty of the charges.

He said there was no existing case law, in SA, that defined what “obtaining access” meant in terms of a criminal prosecution.

Judge Steven Milsteed then closed the court in order to hear the evidence of the e-crime officer.

These cunts make me want to puke.

That's awful. My cousins are sorting out my uncle's case. I ...
People are loathe to question doctors due to the hero status...
Thank you Greg I don't want to hijack this thread, I will...
Sorry if I am going off topic here but anyway some thoughts ...
Quaid it will hurt Minds inert And many to take a squi...
Sorry to hear about your ma, Loccie. A care home whistleblow...
Thank you K9Koulla They kept her hostage for 17 weeks no ...
Supervised visits at care homes... Let that sink in...Put yo...
I am sorry for your loss. My uncle went through the same sit...
ht tps://www.dailymail.co.uk/news/article-3183396/New-end-li...