The Company Of Wolves

I see Greville Janner has been questioned by the old bill:

Leicestershire Police said it had “executed a search warrant at a property in Barnet, north London, as part of an ongoing criminal inquiry”.

So, twenty two years later, Leicestershire plod are having another bash are they?

You see, in 1991, Janner was named in a court case as being the abuser of a 13 year old boy. The court case in question was that of Leicestershire Care home boss Peter Beck.

However, despite being named in court, Janner was never charged with any offence. The Leicestershire Police later said there was no case to answer.

Course, while the LFFGM (Leicestershire Freemasonic Friends of Gerald McCann) disguised as the Leicestershire plod are activating search warrants, perhaps they will also activate some for the company Janner keeps?

You can tell an awful lot about someone by the company they keep don’t cha know.

No surprise there then.

Why on earth would Ham & High use a photo of Janner and Pickles as the header photo on their article about  Janners flat being searched?

Tell me? Pickles? Is he Quare? Hmmm, as you would expect.

Should have seen that coming.

What did the nonce looking judge say? No stone unturned!

Now, where the fuck have I heard that before?

Course, with Janner being 85 years old and on his last legs, don’t be too surprised if the foul old fuck-nonce is hung out to dry… Just Sayin’. 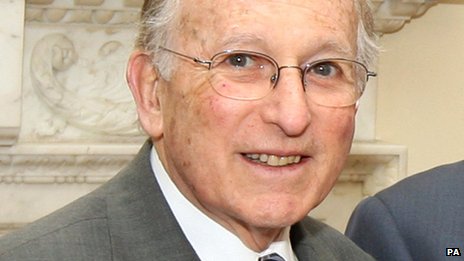 Lord Janner was a Labour MP for 27 years

The London home of Lord Janner has been searched as part of an inquiry into allegations of child abuse, Leicestershire Police has confirmed.

Leicestershire Police said it had “executed a search warrant at a property in Barnet, north London, as part of an ongoing criminal inquiry”.

Greville Janner was a Labour MP for 27 years, in Leicester North West and then Leicester West.

His lawyers said in a statement: “Lord Janner has not been arrested but has been assisting the police with their inquiries.

“We are not able to make any further comment at this time.”

The Cambridge graduate stood down as an MP in 1997 and was subsequently made a life peer.

Lord Janner, a father of three, is a former president of the Board of Deputies of British Jews.

He is also chairman of the Holocaust Education Trust.

Just a quicky My friend Brian.