Remember, Remember, The 5th Of November

Well done to our very own Gallows and the thousands upon thousands of others who took part in the Million Mask March in London yesterday.

Indeed, it was quite obvious to me whilst watching the live streaming that the Odd Bod Plod Squad were itching for a fight and it is to the protestors credit that they didn’t oblige.

Never the less I will leave it to Gallows – a man who I would trust with my life – to fill you in on the details, of which he has set out below.

However, before I piss off and whilst not wishing to take the focus off of yesterdays brilliant effort, can I just remind you that I have the Social Services invading my home again tomorrow. I therefore hope that you have been keeping the pressure up on them and the corrupt Southend plod. 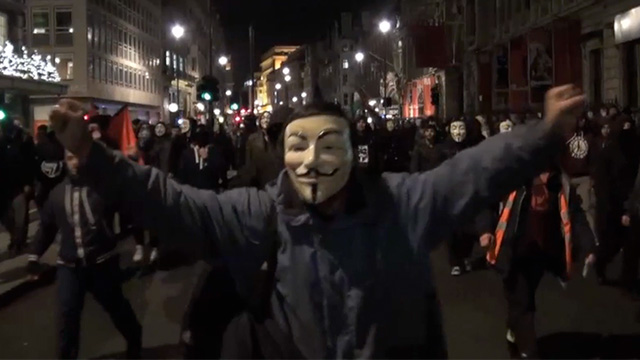 Last night i attended the Million Mask March in London again, we had a good turn out.

We turned up wanting a peaceful protest, the filth turned up in full riot gear armed with batons.

But despite the full body armour, big sticks and helmets we gave them a run for their money, we the people stood our ground, we faced down their intimidation and struck back where we could. At one point we managed to out manoeuvre the police who were trying to kettle protestors, we surrounded them and for a small moment in time we caused them to be afraid, we gave them a reason to fear for their safety as they had done to us.

This may be classed as intimidating behaviour, antagonistic even but by this point we had had enough. In all honesty we could have taken them down, we could have crushed them, maybe we should have, but i like to think were better than those animals and last night we again proved it.

They started the trouble with us, whatever the papers may say. Every place we went to PEACEFULLY protest they shut us down with pushing, shoving, snatching people from the crowd and dividing the protest up so they could keep sections apart from the rest, weakening our numbers, strength and moral.

At the BBC offices we surrounded the entrance and chanted ‘shame on you’, some people let off fire works at the building, others spray painted anti CSA slogans on the wall but only AFTER the police came in and started pushing and shoving people about.

They even brought dogs down to protect the BBC but didn’t get a chance to use them as we kept on the move.

When marching through oxford street the police lined the entrances to Burberry, Louis Vuitton and McDonald’s, leaving the smaller shops unprotected, not that we had the intention of causing harm to any of them.

It was the very public show of priorities of the people in control, the big shops who pay very little towards the upkeep of the police force in the way of taxes effectively had a private police force to watch the doors, whilst the smaller shops, who no doubt pay full rate were left to defend themselves.

This struck me as a good example of the mentality of the state and its idea of protect and serve.

To my brothers and sisters who joined us on the front line, thank you from the bottom of my heart.  We may not all have had the same idea about what we wanted to achieve but we all stood side by side shoulder to shoulder in solidarity, unity and love, we faced down a force that to many are out of reach or reproach, we reminded them for just a moment, that we could if we ALL put our minds to it brush the system aside and create a better existence for us all. I have nothing but admiration for you all and look forward to when we are free. That is just around the corner people, keep pushing we are getting there.

Christopher a man who’s aim is as true as his heart, thanks mate. Riled, well done bro, I heard about the aggro that went on at the bridge, happy you made it out safely.

Zeeus & Josh good effort boys very proud to stand with you, nothing but love for you both, we done well.

To those that supported and helped with logistics, thank you. Next time we will stand together. Remember people the streets our ours, we paid for them, we built them and we own them. We are the power, we are the people.