On the 25th of January 2013 between the hours of 12 Noon and 1.30 PM, the newly elected Police and Crime Commissioner for Sussex, Katy Bourne took part in what she thought would be a good PR stunt.

In her (very limited) wisdom she had decided to host a live question and answer session on Facebook.

What a fucking mistake for the totally out of touch knobhead to make.

Expecting – somewhat naively – to be in for a pleasant time, you can almost feel the rising panic she must have felt, as you scroll down the FB page and see the sheer number of embarrassingly awkward questions that came flooding in.

Despite living in Essex I was made aware of this event – albeit after it had finished – by a friend. After taking a gander, I intended to write a quick report about this PR disaster for inclusion on this site the very same day – unfortunately time didn’t allow me too in the end.

However, after receiving a message yesterday, 30/1/13 from a Mr Matt Taylor (see article below), I felt compelled to publish his  report along with some print screen photos of the PR disaster that I had taken on the 25th.

I am sure many of you already know my view on the Police. However, I should point out that there are still some good, honest Policemen amongst the thick thugs – albeit they are mainly older and rapidly shrinking in numbers. This minority are horrified, dismayed and even embarrassed  at what their profession has become.

I am sure ‘Clueless Katy’  would be equally horrified to learn that I have a number of Policemen who regularly read this site, one of whom actually donates. Hardly surprising when you know about the corruption that takes place within the forces. Corruption that I’m sorry to say, starts  from the top down.

Clueless Kate! You are my Mug of the Day. 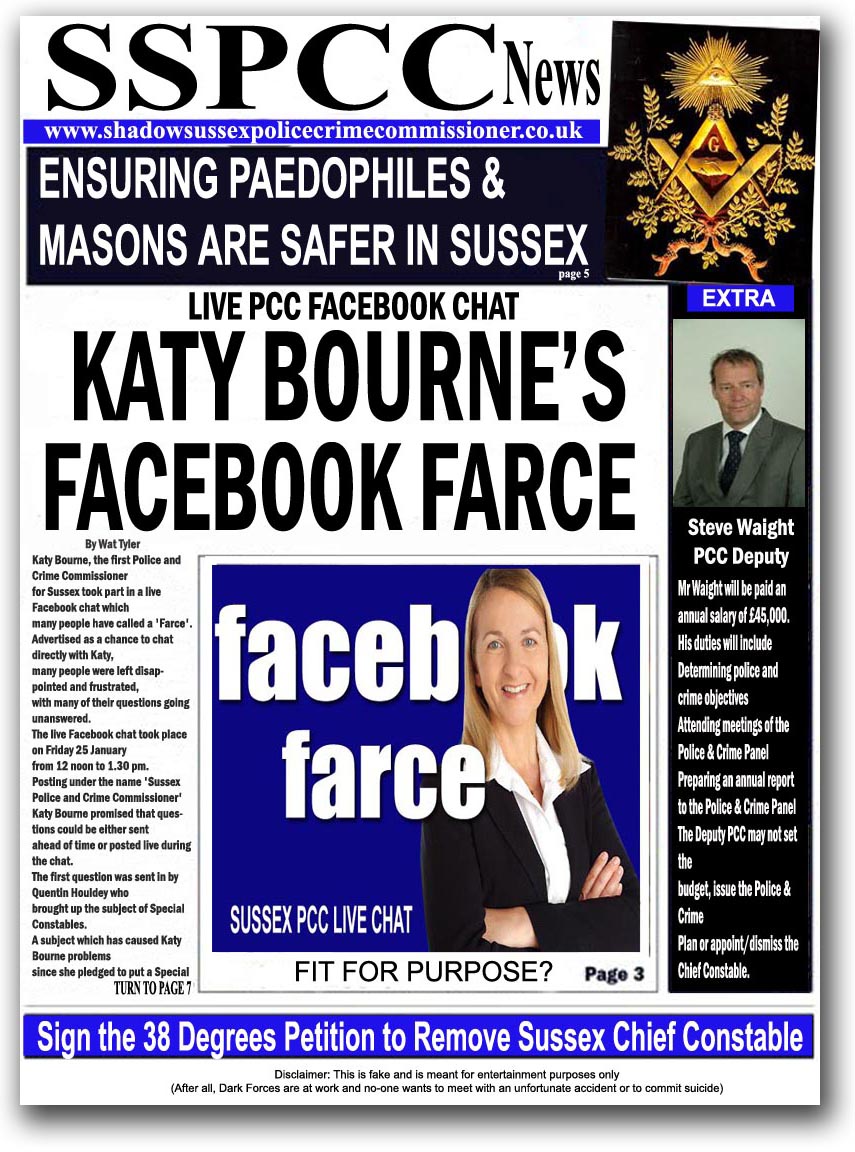 Katy Bourne, the first Police and Crime Commissioner for Sussex took part in a live Facebook chat which many people have called a ‘Farce’.

Advertised as a chance to chat directly with Katy, many people were left disappointed and frustrated, with many of their questions going unanswered.

Posting under the name ‘Sussex Police and Crime Commissioner’, Katy Bourne promised that questions could be either sent ahead of time or posted live during the chat.

The first sets of questions were sent in by Quentin Houldey who brought up the subject of Special Constables. A subject which has caused Katy Bourne problems since she pledged to put a Special Constable in every village.

No answers to these initial questions were forth-coming, either during the hour and a half chat, or anytime afterwards.

The next question brought up the worrying development in Worthing of gang members from London, infiltrating the seaside town, which is seen as virgin territory for London based criminal gangs.

Quote “What are the Police going to do about the alarming number of London black boys descending on Worthing and selling drugs with a blatancy which suggests they can’t believe their luck at finding a town where they can act with impunity?”

The subject quickly moved onto Police brutality and corruption. John Flynn joined in the conversation by telling us about being mace sprayed and half kicked to death in a cell. The CCTV footage which was requested, was ‘lost’ in downloading! ‘Curiously’ he said, ‘there were only two people allowed or capable of downloading footage, one of who just happened to be the custody Sergeant responsible for my care that night.’

Some contributors even started to complain that their questions were being taken down.

This prompted ‘Sussex Police and Crime Commissioner’ to defend herself with ‘Chris we haven’t deleted any questions – and won’t unless they are offensive!’

Soft questions were asked such as ‘What the hardest part of her job was?’ and more in-depth such as ‘Do you welcome the extra public scrutiny of the Shadow Sussex Police and Crime Commissioners?’

The only response was ‘Lots of questions coming in. I’m answering these as fast as I can, working my way up from the bottom of the page. Thanks for your patience, I will get to you. Katy.’

Keeping to her word, Katy Bourne did eventually answer a question.

The question posed by  Fabrice Bardsley read, ‘Transparency of Police Officers – re: Freemasonic membership. In light of links to child abuse, child abuse investigations and institutional abuse investigations that have not been successful, open and transparent in the public’s eyes. Where serious accusations of freemasonic influence have been made, will the PCC make the protection of the young and vulnerable her priorities, by making it policy that all police employees make a declaration of Masonic membership? So that there is no question of impropriety as there is today. Thus demonstrating the police is working for the people of Sussex, not vested interests of the polices own.’

To which her reply was ‘Hi Fabrice Bardsley thanks for joining the chat today. The public rightly expects the highest standards of behaviour by Sussex Police officers and staff, and all allegations of misconduct are taken incredibly seriously. The national HMIC Integrity Report recently highlighted that forces have different processes for defining and investigating corruption. While their inspection found no specific issues of concern in how Sussex Police deals with these issues, we are working to ensure we meet all their national recommendations to create a more consistent approach. Thanks, Katy.’

Let’s take a moment to look at her answer.

To state that all allegations of misconduct (or even common allegations of crimes for that matter) are taken ‘incredibly seriously’ either deems Katy Bourne a lair or incredibly ignorant off Sussex Police’s record over the last few decades.

As reported by the many local and national newspapers over the last few weeks, a number of victims of child-abuse approached Sussex Police to report crimes committed by the infamous TV personality, Jimmy Saville. On all occasions, Sussex Police encouraged the victims to drop their allegations due to the nature of the offence and probability of a failed prosecution.

As the Deputy Chief Constable said ‘We also recognise that we could have done better and are committed to honest reflection and learning lessons for the future.’

‘Could have done better,’ is the understatement of the century.

This, compounded with her decision to extend Sussex Chief Constable Martin Richard’s contract for a year, (after his misconduct charge), does nothing to give anything Katy Bourne says any credibility.

She states with conviction ‘Protecting the young and vulnerable is one of the highest priorities for any police force and Sussex Police is committed to safeguarding and promoting the welfare of all children. Thanks for your communications today, but I really do have to go now. Katy.’

Chas Alexander asks, ‘How can this be? When a complaint was made against Arun District Council in 2002 that a paedophile ring was operating within the council offices, the complaint had been interfered with by the Chief Constable who appears to be friends with the ex-Chief Executive of the Council.’

‘Interfered with’ as in 2008 when child-abuse victims approached Sussex Police about Jimmy Saville, but were turned away with a smile and a pat on their bottoms for their troubles.

How can Katy Bourne say “Protecting the young and vulnerable is one of the highest priorities for any police force and Sussex Police is committed to safeguarding and promoting the welfare of all children,” when evidence suggests a paedophile ring running inside a local authority, has never been fully investigated.

As Chas Alexander asks in his ‘REMOVE SUSSEX CHIEF CONSTABLE’ petition on the 38 Degrees website, ‘How many children have continued to be abused in Littlehampton/Bognor Regis in the last 10 years since the complaint was originally made?’ Sussex Police need to answer the allegation that they have deliberately refused to investigate friends who work for Arun District Council and they need to be held to account as does the Chief Constable.’

Throughout the Facebook farce it became evident that all Katy Bourne cared about was whether Andy Murray was beating Roger Federer at tennis,

But still the questions poured in and not enough answers spilled out.

The subject of police corruption and the paedophile/Masonic connection crept up again and again.

Her favourite response seemed to be ‘Thanks for your comments. Perhaps you could email me with some more details and I will look into this: spcc@sussex-pcc.gov.uk. Thanks, Katy.’

Though even she had to eventually confront the subject, ‘Hi Helen Ansell and Fabrice Bardsley. Police officers are required to declare on appointment and throughout their career any affiliation to Masonic lodges. Thanks, Katy.’

Fabrice Bardsley, ‘Really? A public declaration? Where can the public obtain these records, Katy?’

Helen Ansell, ‘I take it this declaration is public record? How can we access it?’

To which she replied, ‘The declaration is to the employer and is not for public record.’

Fabrice Bardsley ‘….err Katy, Thanks for the reply, now for the 3rd time can you please answer my question? – Will you make protection of young and vulnerable people your priority by making it policy to require Sussex Police officers to declare (publicly) if they are a member of a Masonic lodge, Yes or No? – I’m very glad you think corruption and misconduct are under control… I’m asking if you are going to take the simple step I mentioned above to restore public confidence… and if not why? – How can a declaration to Sussex Police help the public with accountability and transparency?’

Yep, you guessed it, no answer…

She couldn’t get away from the Facebook Live Chat Farce quick enough, “Only 15 minutes left and then I have to rush to my next appointment. I’m still answering your questions and any that I haven’t responded to before 1.30pm I will get back to as soon as I can. Thanks, Katy ”

But she has never got back to any of the questions.

Are we being fair on Katy Bourne?

Whose idea was it to do live Facebook chat? They must have known it would attract a big following. According to the Facebook event page 196 people were invited, 56 confirmed and 4 said maybe. Shouldn’t a different approach have been made?

We’ll leave the last word with Katy, “Hi everyone thanks so much for taking part but I have to dash now. Apologies if I didn’t get to your question – I will respond. In the meantime, stay safe. Let’s do this again soon.”

Sign the 38 Degree Petition to the REMOVE SUSSEX CHIEF CONSTABLE