BBC News, with thanks to me mucker Terry.

Its a god-dam miracle a tell thee.

Eleven and a half years after the fact, a 5ft piece of landing gear from one of the planes flown into the twin towers has been found wedged between two buildings.

This undiscovered till now piece of wreckage is even more of a miracle when you consider the immense heat generated by the impact (We know it was immense because the US govt told us it was), and the fact that both of the planes undercarriage’s were up on impact.

New York police have sealed of the area and are looking to see if there are any body parts in the 18 inch gap. They have however, ruled out the possibility of finding any survivors.

Its a god-dam fucking miracle a tell thee.

New York police say what appears to be part of the landing gear of one of the jets flown into the World Trade Center on 11 September 2001 has been found.

It was found on Wednesday by surveyors inspecting a lower Manhattan building.

Nearly 3,000 people died in the terror attacks as planes were brought down in New York, Washington and Pennsylvania.

Five suspected al-Qaeda militants are awaiting trial for the attacks at a military tribunal at the US detention facility in Guantanamo Bay, Cuba.

“It’s a manifestation of a horrific terrorist act a block and a half away from where we stand,” New York Police Commissioner Ray Kelly told reporters outside the secured site. “It brings back terrible memories to anyone who was here, who was involved in that event.”

Mr Kelly told reporters after inspecting it that a length of rope was looped around the piece of steel and that no marks were visible on the walls overhead.

What appears to be the remains of a broken pulley can be seen with the wreckage and the New York Times reports that Mr Kelly did not completely exclude the idea that the aircraft debris may have been lowered into the gap.

The New York Police Department has secured the area behind 51 Park Place and 50 Murray Street as a crime scene. 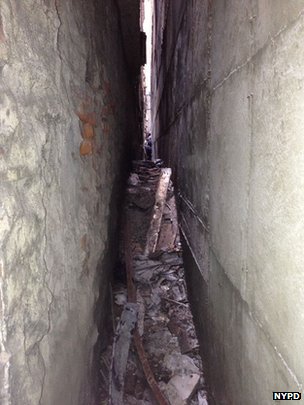 The location is at the site where a mosque and community centre has been proposed, three streets away from “Ground Zero” – the site of the twin towers.

Police have taken photographs and are keeping it off-limits until a health assessment has been made by the medical examiner’s office.

He said the landing gear was found at about 11:00 local time (15:00 GMT) on Wednesday by surveyors hired by the owner of 51 Park Place.

Although rubble from the attack was cleared in 2002, other debris has been found scattered across the area in the years since.

Khalid Sheikh Mohammed is accused of masterminding the attacks while the other four men being held at Guantanamo Bay are implicated for providing support for the co-ordinated hijacking.

They are charged with conspiring with al-Qaeda, terrorism, and one count of murder for each known victim of the 11 September attacks at the time the charges were filed – 2,976 in total.

The five face a possible death sentence if convicted.

Hard up Harris/ House hold name Comedian, about to cop it A definite no, no