Graham Ovenden gets suspended sentence for child sexual offences… ARE YOU GETTING THIS?

It was blatantly obvious that Graham Ovendon was being protected, but now we can see to what extent.

The fowl, vile abomination of a  thing, remains a danger to children, yet some equally fowl, vile thing of a judge decided that his punishment for years of abuse to very young girls was only worth a 12 month suspended jail sentence.

The judge said he had to take into account the sentencing regime in place at the time of the offences, between 25 and 40 years ago, before newer laws to protect children were brought in… Did he fuck.

The vile cunt who is suppose to uphold justice also said one of the offences Ovenden was convicted of – asking a girl to touch him while they were in a bath together – could today be treated as inciting a child to engage in a sexual act, carrying a 14-year maximum jail sentence… WELL GIVE THE CUNT 14 YEARS THEN YOU NONCE PROTECTING SHIT HEAD.

THIS THING WHO PAINTS LITTLE CHILDREN IN THE NUDE AND GETS INTO THE BATH WITH THEM IS STILL A FUCKING MENACE, YOU PAEDOPHILE PROTECTING FUCK WIT.

And, this was a trial by Jury to which the sick, sick, sick cunt pleaded not guilty.

When someone pleads not guilty in crown court and they are then found guilty, the sentencing is always tougher. Yet the nonce cunt, gave the nonce cunt a 12 month suspended sentence.

ARE YOU FUCKING GETTING THIS?

THIS IS WHAT YOU HAVE TO LOOK FORWARD TO YOU FUCKING PLEBS.

The elites raping our kids and getting away with it. And why?

BECAUSE THEY ARE ALL FUCKING NONCES THATS WHY!  THE ROYAL FAMILY, THE GOVERNMENT, THE POLICE TOP BRASS, AND THE FUCKING JUDGES TOO. VILE, EVIL, CHILD RAPISTS.

The quicker the blind cunts who think the likes of us are mad realise that fact, the sooner we can protect our children. Until that time comes, the sick cunts with money and power will keep on and on.

I am so fucking angry at the moment, I would fucking hang the Monsters myself. 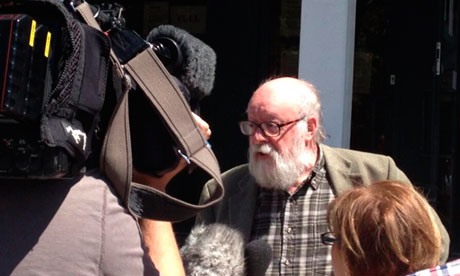 An internationally renowned artist has been given a 12-month jail sentence, suspended for two years, after being found guilty of a string of sexual offences against former child models.

Sentencing Graham Ovenden at Plymouth crown court, Judge Graham Cottle told Ovenden: “There can be no doubt that at that time you had a sexual interest in children.”

Ovenden, 70, who studied under the pop artist Sir Peter Blake, was convicted of six charges of indecency with girls and one allegation of indecent assault.

Cottle said a “stream” of young girls had arrived at Ovenden’s home to be photographed. “The girls had no understanding at that time of the true purpose behind what you were doing, a purpose that was undoubtedly sexual,” the judge said.

“There can be no doubt that at that time you had a sexual interest in children. You maintained it was an artistic interest in the female form. The jury disagreed. I believe their view was an entirely proper reflection of the attitude the general public would take.”

Cottle said it was only as adults that some of Ovenden’s victims had realised they had “been taken advantage of as innocent young children by a man who was pursing his sexual interest”.

“They were being used,” Cottle added, flagging up one image of a naked girl with her eyes taped over.

He said that by not admitting his offences Ovenden had put his victims through the anxiety of taking part in the trial. “Their victim impact statements make it quite clear how they have been affected,” he said.

The judge said one of the offences Ovenden was convicted of – asking a girl to touch him while they were in a bath together – could today be treated as inciting a child to engage in a sexual act, carrying a 14-year maximum jail sentence.

But the judge said he had to take into account the sentencing regime in place at the time of the offences, between 25 and 40 years ago, before newer laws to protect children were brought in.

He also took into account that Ovenden was 70, had no previous convictions and had endured a “steep fall from grace”.

He said: “You enjoyed a reputation as an eminent landscape artist. Though the quality of your work may remain undiminished, your personal reputation has been severely tarnished. Galleries that were pleased to display your work have taken down your work.”

Outside court, Ovenden refused to apologise to his victims. “Why should I apologise for something I haven’t done?” he said.

During his trial earlier this year Ovenden fiercely denied a sexual interest in children and claimed his images of naked girls were all about celebrating the innocence of childhood.

For decades Ovenden lived and worked at Barley Splatt, an estate and neo-gothic mansion deep in the heart of Bodmin Moor, Cornwall. It was here some of his victims claimed he had committed offences against them in the 70s and 80s.

Ovenden denied that he had assaulted any of the children, who were as young as six. He claimed he was the target of a witch-hunt and his images of children were all about capturing them in a “state of grace”.

But a jury found him guilty of seven offences earlier this year.

The indecent assault relates to the touching of a girl’s breasts through her clothes.

One of the indecency counts involves an incident in which he got into a bath with the same girl and asked her to touch him.

The other indecency charges relate to photographs he took of two other girls.

Defending, Christopher Quinlan QC told the court that Ovenden had suffered a blow to his reputation. Some of his works had been removed from display by the Tate.

Quinlan said: “There has been a deal of publicity about these matters. Shame has been visited upon him.”

The barrister also pointed out that Ovenden was 70 and had been in poor health.

Cottle argued that the offences relating to photography should be regarded as a course of conduct rather than isolated incidents.

Among supporters of Ovenden in court was the explorer Robin Hanbury-Tenison, who also lives on Bodmin Moor.